Last Thursday through Saturday, I  had a garage sale.  It’s a lot more fun going to them then it is having them.

First of all, in Kansas you never know when to have a sale. Is it going to be freezing in in May?  Or will you roast in September?

I, it turns out, roasted on Thursday, endured torrential rain on Friday, and then had a pretty day Saturday. I must say I’m pretty proud of myself for setting up and running the sale while my hubby was out of town.

I did encounter some odd ducks during the sale though. There was the man that made me hold his one-eyed chihuahua while he shopped; there was the guy who I’m pretty sure was buying my mom’s clothes for himself; there was a woman who had been shopping for 4 or 5 minutes and turned to speak to me and smoke came out her nostrils even though she wasn’t smoking; and of course all of the people who let their kids run completely wild in my garage.

Garage sale money is that hardest money you will ever make.

Last g-sale I had, a woman bought a ton of my daughter’s clothes. It took me awhile to total her up but I went over the numbers 3 times and my husband went over it twice also to make sure it was right. I even let the woman look at it and she seemed satisfied. She left with tons of stuff she got for a steal.

Three hours later she came back and said we over charged her by $15. How would she know this since we removed the tags as we totaled her up?

Anyway, we took out the sheet we totaled her up with and tried to show her. She then got right in my face and literally screamed “I AM NOT A LIAR!!!”.

What the heck is her deal? Who does that? Now I have had a lot of garage sales throughout the years, but never have I had anyone scream in my face.  Then she turned and ran to her car. Wow.

So fast forward to this sale, and guess who my first customer was? Just guess? Yep, the insane screaming woman. So naturally I’m really nervous when she walks up to my house. She starts shopping, and I’m bracing myself to duck and looking around for something to use as a weapon if it came down to it.

She acted sweet as could be though, like she never saw me before, like she had never scared the bejeebies out of me. I held my breath the whole time. Then she left and I counted my blessings. Why would she come back to my house after she thought we had screwed her over before? Or does she do this type of thing so often she just didn’t remember.

Now I know there are a lot of nutty people anywhere you go, but I feel like I met more than my share the last three days. I did get rid of a bunch of stuff and made some decent money in the process. It did, slow me down on my furniture projects though.

Tomorrow I have a TV console to distress and glaze, a side table to glaze, and two end tables to finish painting. I will get you some new photos on those ASAP.

I found this two tiered table from the 60’s laying on the curb for trash pick up.  Super excited,  I loaded it up in the back of my car (my daughter would die if she knew I did that!)

I roughed it up a bit, used a really bright turquoise on it, distressed, glazed and waxed it. Good as new, actually better!

I took this table that was somebody’s trash and turned into a nice lady’s treasure (who probably has never once screamed at a garage sale hostess). 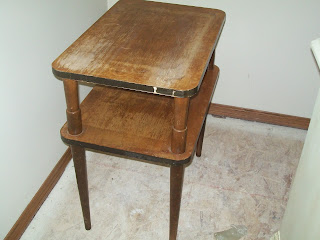 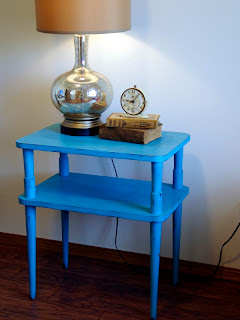 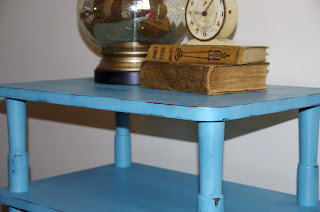