So I have told you about this set of dining chairs I got at a yard sale this summer. There was a set of 5:  two captains chairs and 3 without arms.

They were godawful yellow with teal velvet seats. After removing 8 billion staples, I found that under the teal seats was an even worse yellow velvet. Originally, I decided to spray paint them a high gloss black. This being my first attempt a big spray paint project, I thought it would be easy.

I first used 4 cans of Kilz spray primer (took a lot more than I thought). Then I started with the black. These chairs soaked it up like I had never seen before.

6 cans later I still needed more. In some spots it was high gloss in others it was flat. Then there were all the drips.

Using black in a shadowy garage, it was hard to see where it had ran until it already dried. Then I would sand the drips and after I repainted it you could see where it was sanded it was uneven.

Ugh! I finally gave up and sat them in the basement for months.

So a million dollars worth of spray paint later, I decided to chalkpaint them. This time I went with ivory I had to do several coats to cover up the black. I then distressed them to let the black show through and used clear wax to finish it off.  For the seat, I used a burlap colored fabric with a black french script on it.

I think they turned out pretty cute. They should after 800 man hours. They would look great with an ivory or black table. Even a neat oak table would look great. I will have to charge about $10,000 for these in order to get make more than 2 cents per hour on these lol! 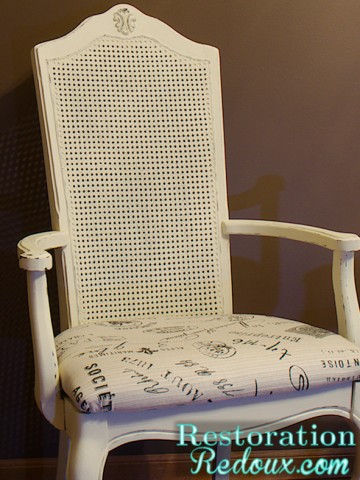