My dear friend Casey (whom I couldn’t live without) has a term for my type of projects. She’s named my style “Alice in Wonderlandish”. She said my pieces were full of bright colors, and were a little quirky with interesting shapes and unique  features. If grouped together they look Wonderlandish. Never thought of it that way. Lately though with the crazy things that have been happening around here, I do sort of feel like we fell down the rabbit hole. For example:

Let me tell you about last night (I swear I couldn’t make this stuff up if I tried). So I’m in bed downstairs, notice I say “I’m in bed” not “I’m asleep”. I lay there, counting sheep, from 1:00 to 2:15. For those who have asked, I do take melatonin … no dice. So at 2:15 Charlie starts barking hysterically in the living room. Then it stops. 15 minutes later he’s doing it again, only this time it’s his “someone’s at the door” bark. I hear my hubby’s feet shuffle around upstairs and figure he’s got it under control. 3:00 same freaking thing. I’m done. I stumble up the stairs to find Charlie staring out the front door going nuts. I look out and what do I see? A HUGE FREAKING OPOSSUM!  This sucker is bigger than 2 of my dogs combined, and it’s just looking right at me, eating Walter’s food. 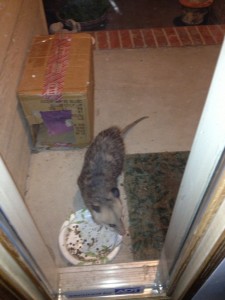 Who is Walter you might be asking? Walter is our neighborhood stray cat that I want to bring in the house but my stubborn husband won’t let me (supposedly 4 animals is already too many, whateva). He is this great big orange cat that is so incredibly lovey — so I feed him, and from the size of him I must not be the only one in the neighborhood he’s suckered into some dinner. He pretty much lives on our front porch, and I hate for him to be cold so I always keep a box for him to sleep in. Yes, you don’t have to tell me that this looks trashy–especially when I go through such great pains to make my house beautiful, but I am (and always have been) an animal lover. So tacky or not his cardboard box stays. He loves to be picked up and he wraps his front arms around my neck and his back legs around my waist (yes cats have arms and legs) just like a baby. He is always in our back yard and the dogs go insane, but he just sits there, not caring a bit about them (probably because he is bigger than each of them). He always appears out of nowhere. We open the front door, back door, garage door, or side door, and BOOM, there is Walter. How does he get into the garage without us noticing? You open the front door to let someone in and Walter slides right in too.  He’ll even jump into your car if you leave the door open too long. 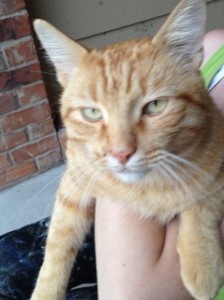 Back to the possum. Several weeks ago we saw this ugly sucker on our back deck. It doesn’t appear to be scared of humans in the slightest. We are worried it’s going to hurt our pups, so we got a live trap from my in laws. Topher wanted to spray wasp spray at it (since he could do it from 20 feet away), but ugly or not, I didn’t want to hurt it.  I just want to scare it far, far away. I told him to get the hose and spray it but at 2 in the morning he wasn’t going to walk past this hissing, growling, probably rabid beast to go around the house to hook up the hose. So he got the Windex bottle out and started squirting the heck out of it. The opossum just looked at my husband like “seriously dude, your going to Windex me to death?”.  Needless to say that didn’t work. So after sundown anytime the dogs have to go out, Topher has to go out with them with a giant stick.  And since that night we have been baiting the trap with cat food and in the morning the flipping food is gone but no possum.

Apparently it has now moved to the front of the house. So after it ate all of Walter’s food last night it waddled away.  Now it is 3:30, and I have yet to sleep a wink. So just as I start drifting off, I hear metal noises. It takes me a minute to register that it’s the trap! Holy opossum! I think we caught it. I get Topher to wake up again (which he wasn’t excited about but at least he had been to sleep), and we go out back.  We see the trap has sprung and we are so excited! No more opossum! We get closer and realize the opossum is now orange and meowing. For the love of God, we caught Walter!

So we are now back to square one. Does anyone have any tips on how to catch a opossum? If you do give me a call because I think I have traumatized my neighborhood cat.

Speaking of calling, this is a little blue telephone table that I did a while back. Unfortunately, once again I got too excited to start this one and didn’t take a before picture. It was a scratched up chocolate mess, but the shape was super cute. It also has a little drawerish thing that pulls out and a hole in the back which was originally used to have the phone cords go through. A cute little couple bought it (I am now doing a headboard and bookshelf for them) and she said she puts her flat iron, and other things used to get ready, on it now. 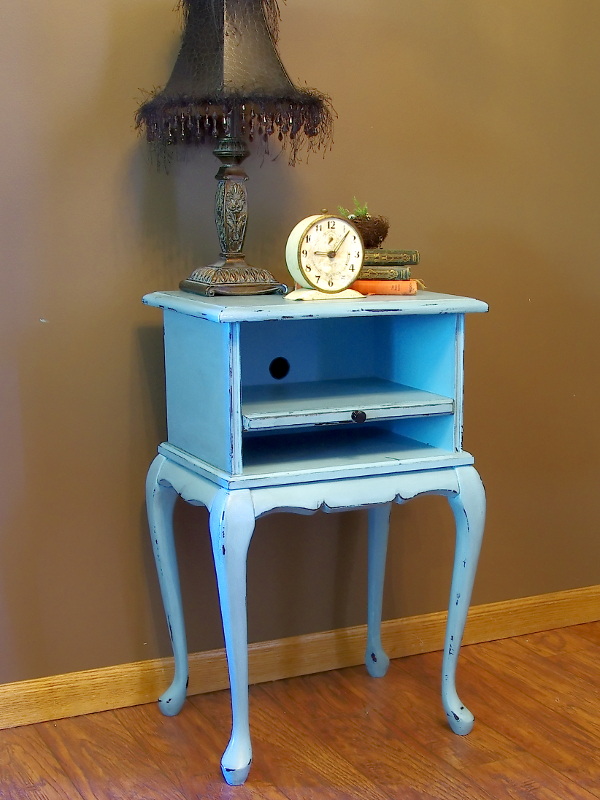 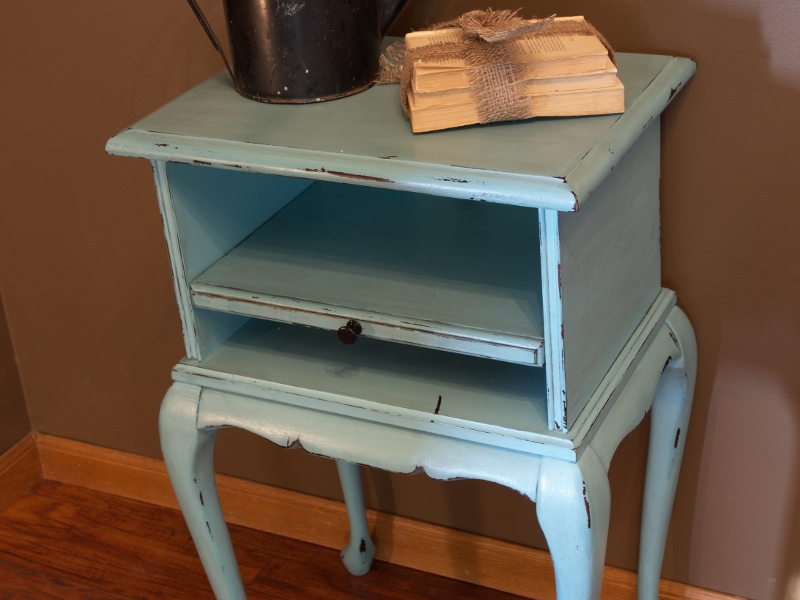 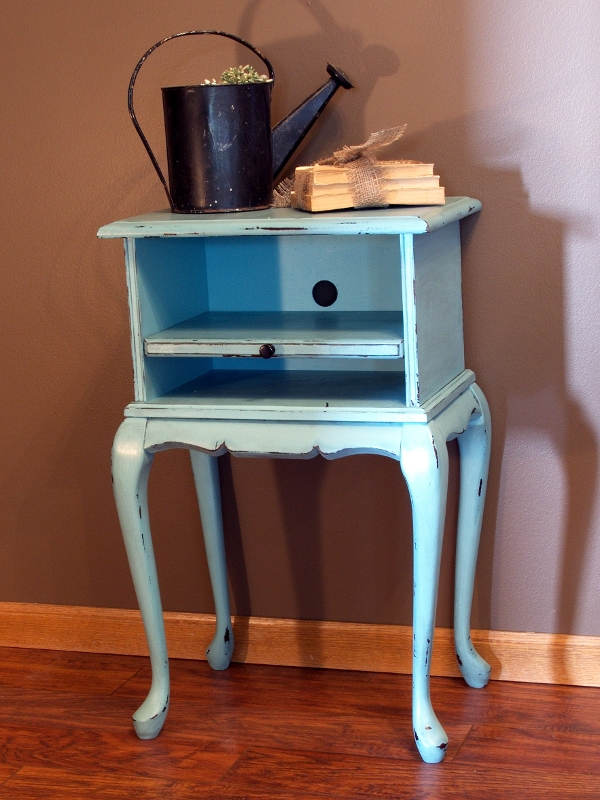