OMG! Red Alert! Red Alert! We have caught the opossum!! After weeks of trying he (or I guess it could be a she) has been captured!

Here is the part where I’m freaking out, it’s been in the cage in my driveway all day! Topher only dragged the cage from the backyard to the front (so the dogs could go out without going insane when they saw it). He didn’t have time to rehome it before work.

I feel terrible that it hasn’t had any food or water since midnight.  So I called our local Animal Control and asked them to come get this sucker. They said they only deal with domesticated animals. What the heck? If they won’t come and get it, who will? They said they could give me a man’s name, and he would dispose of it for a $100.  WHAT? A $100 to get vermin off of my driveway? Now I really want this guy gone, but I am way too cheap to pay $100 to do it — and besides, I just want it relocated not “disposed of”.

So I have to wait until Topher gets home to get this opossum hauled off. Every time I have to leave the house, I have to see its beady little eyes staring at me. It is seriously creeping me out. It.has.to.go.now. So I call my brother, but he is busy. I call my cousin, but he is on his way out of town; plus, he makes me feel guilty about leaving it without food or water. What can I do? I can’t open the cage.

So I decide to sprinkle some cat food over the cage.

I slowly walk up to the cage, I start to move my arm towards the cage and the sucker flies around and charges at me! AAAAAAAAGGGGGG!!!!! It sacred the crap out of me! I’m sure my neighbors now think I am a freak. 1. for having a opossum in a cage in my driveway, and 2. for screaming like a little girl when it tried to attack me. Now I know it’s just trying to defend itself, but I was just trying to be nice and feed him. So I am done with that, he will just have to wait.

Thirty minutes later it starts to sprinkle. I am, yet again, feeling guilty that it has no shelter, but I tell myself it has been sprinkled on before. A few minutes after that it is pouring. Ugh, I can’t leave it out there all exposed so I decide to put a tarp over it. So I am out there getting absolutely soaked and it is no longer sitting up staring at me it looks kind of, well, dead.

Oh great! We killed the thing! It probably died of dehydration. We are bad people.

I’m getting up closer to see if I see its chest moving, and BAM! The giant rat charges again! I nearly died, my heart is beating out of control! Mind you all of this time there is torrential rain, and I am absolutely soaked.

Forget it. Here I have had massive anxiety all day worrying about this nasty opossum we have trapped, and I have wasted quite a bit of time calling every city agencys and family members trying to free it. I have been soaked and almost gone into cardiac arrest twice trying to feed and shelter it, and the little (maybe rabid) beast just keeps trying to attack me. So I am counting down the minutes until Topher gets home, and he can be the one to deal with it. What a day!

Here’s a couple of sneak peeks of some furniture I’m working on. I’m almost done with the bookshelf but this is all that I’m showing because I want it to be a surprise for the owner, and the other is a table that I’m halfway finished with. 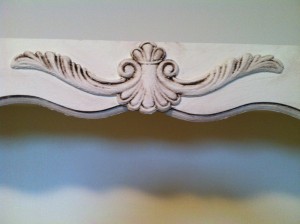 I hope everyone has a vermin free week!