I got a cute little three shelf bookcase at an estate sale. I thought it would be about the right size for a child’s bedroom.

So I decided not to go my usual route with the distressing and making it look aged. I went for a bright sunny yellow and painted the back of the shelves white.

It looked a bit boring, so I decided I would try my hand at stenciling. I found a sweet one with flowers thinking it couldn’t be very hard could it? Well let’s just say my flowers looked like big yellow blobs. Not so cute.

So I painted over them and waited for it to dry.

Second attempt: better than blobs but still not flowers.

I painted over them again and waited.

So apparently, with stenciling the less paint on your brush the better. Third attempt looked really good! I slapped on some poly and had a darling little bookshelf perfect for a little girls room. 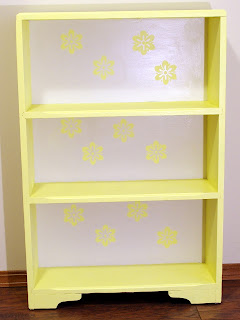 A few hours after listing it I got a call that they would pick it up that night but she was asking all about chalk paint and how it worked. I thought maybe the lady was wanting to learn how to do it herself.

When she came to pick it up she told be she needed to know what the chalk paint was made of because she was going to paint over it!!!!

OMG!! She was going to paint over my perfect little flowers! She apparently had a son and wanted a red bookshelf.

So sad. I guess money is money.  We made the sale, my girly bookshelf became her property, and she could do whatever she liked with it.

If I had known that was the case I would have left it the ugly brown it started out to be. I guess you never really know what anyone is going to do with the piece you have slaved over anyway. I might be appalled at what some of my pieces look like now.

In my mind however, they all still look just the way they did when the left my house.