Some people just come into this world being accident prone. No matter how careful they are they just can’t help injuring themselves. Well my husband is one of those people. If there is a glass of water to be knocked over he’s the one to do it. If there are stairs to fall down, he’s your man. If there is a manhole without it’s cover, down he goes (I swear that really happened!).

There was one day when we stopped at 7-11 to get something. My daughter and I waited in the car while my husband went in. While getting out of the car he nailed his head on the roof of the car. Now my daughter and I were trying not to laugh, but you know, the harder you try the worse it is. He then got inside the store, and his shoelace caught on the newspaper stand. There he is walking, dragging this newspaper stand along with him. Poor guy! We had to watch him as he drug the stand back to where it should be. So of course that has my daughter and I in hysterics at this point. Then as he gets back into the car, he slams his leg in the door. We lost it at that point. My kiddo and I had tears running down our faces. Mind you that he never really hurt himself or it wouldn’t have been that funny — we aren’t that heartless. All three things happened within 3 minutes! How does that happen?

That’s just how it works with my husband. Expect the unexpected. He may be a little clumsy but he’s a wonderful husband and an amazing father. He puts up with all of my craziness and loves me anyway. He drives me all across town (and further) picking up furniture that he thinks is total junk. He is then very proud of me when I turn that junk into something pretty cool. He has spent hours helping me develop this blog and doesn’t even get too annoyed when I ask him how to do this or that on the blog for the 15th time. He’s the one who mixes up my paint and makes a wobbly table sturdy again. He nails together dresser drawers and is the wood putty king. 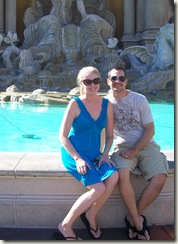 My dear hubby or Topher as I call him, is one of the smartest people I know. He’s also one of the most caring and loyal. So if he knocks off my plate during dinner or falls off the porch into my mums, so be it. I’m still one lucky lady. 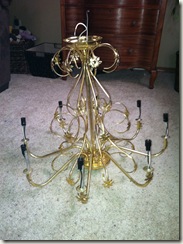 I got this chandelier at a yard sale for $25. It was loaded with all different size crystals. I just didn’t love the gaudy gold. So I decided to paint it. Since I was working on another project, my husband told me he would take the crystals off. I told him to make sure to take a before picture so I knew where all of the crystals went since there were so many different size.

As you can tell by this photo … he forgot. After days of painting it (it was harder than I thought, even after priming it, the paint still didn’t want to stick) it was done. I started putting crystals on, not knowing what the heck I was doing. There were seven different sizes besides the rope crystals. It took me 3 days to get them all on right (at least I think they are right) and it looked gorgeous! None of these pictures do it justice.  I’ll show more pictures once I get my hubby to hang it. 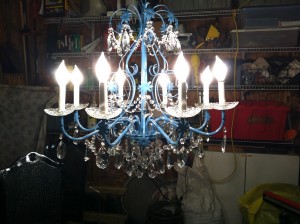 I’m putting it in my kitchen. My husband thinks that’s an insane place for a chandelier but that’s okay. He has learned to trust my design choices. Here’s the finished product! 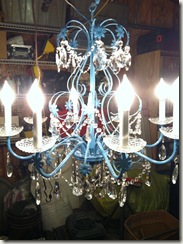